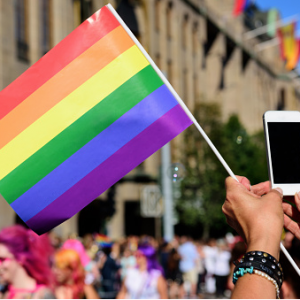 This weekend Congregation Kol Ami in Elkins Park, along with J.Proud, a program of Jewish Family and Children’s Service, hosts “Kindness Counts: Beyond the Gender Boxes, Embracing Transgender and Nonbinary Jews and Allies in the Mishkan.”

The conference, which takes place on Nov. 13 from 1 to 5:30 p.m. at Kol Ami, will give Jewish community members an opportunity to understand how to be more inclusive of members of the LGBTQ Jewish community in Philadelphia.

This time around, Schneider and fellow “Kindness Counts” co-chairs Jane Tausig and Morgan Selkirk decided to focus specifically on transgender and nonbinary (not identified as either male or female) inclusion within Judaism, hopefully answering questions on how Jewish synagogues and leadership can be more supportive and embracing.

The first conference, organized by Kol Ami leadership, aimed to reach out to the LGBTQ community and help other Jewish institutions “learn how to best support LGBTQ folks, so it [was] more about raising awareness,” Schneider said.

This year’s conference will be filled with comprehensive workshops for teens, families, synagogue professionals and lay leaders about how to create open dialogue. Participants will discuss Jewish commandments and values alongside a Q&A panel discussion on the use of pronouns.

Workshop topics include trans/nonbinary 101, explaining the basics for allies and professionals; trans and queer 101, providing learning and teaching techniques; religious education; trans/ nonbinary inclusive youth groups; the idea that “we are all created in the image of God”; tikkun olam; how to reorient your community; inclusive rituals and spiritual growth; and how to provide emotional support.

The event comes a week before Transgender Day of Remembrance, which honors all the transgender people who have died over the past year to either homicide or suicide.

For transgender people who are marginalized and oppressed, Schneider said, “it really is a way to come together and support one another and mourn the loss and celebrate the lives that we’ve lost to those who identify as trans.”

Schneider has led a lot of training workshops on this subject matter, but Schneider hopes this year’s conference will enlighten people in new ways.

“In my opinion, I feel that a lot of institutions will say they’re welcoming of LGBTQ folks and communities but when we actually drove down and talked about what makes an institution inclusive, it’s pretty eye-opening for many of these leaders to see that perhaps their institution isn’t as inclusive as they thought,” Schneider said.

“As a trans queer Jew in the Philadelphia community working with LGBTQ Jews and their families, I felt that this was a really great transition from the last conference being more broad into focusing on how do we support the unique issues and topics that come up for trans and nonbinary folks.”

Schneider seeks a broad range of participants, and they are targeting synagogues in the hope that they will invite their entire leadership to be a part of it.

“Everyone — educators, frontline staff, clergy, community members — they can all benefit from the array of workshops that we’ll be providing,” Schneider said, which will also create helpful communication between teens and parents.

The panel discussion will feature a parent and grandparent of a transgender child.

“They’ll share their stories — they’re very colorful — and hopefully people will connect with it and feel encouraged and inspired to take back what they learned to their respective Jewish spaces and be an agent of change and really help make a difference in the community,” Schneider said.

“Beyond my experience, I’ve gotten to work closely with LGBTQ folks locally but also nationally,” Schneider continued. “In particular here in Philadelphia — and it’s a fact that Philadelphia’s very LGBTQ welcoming as a whole — but when we begin to look at individual spaces and look at programming and policies that would support inclusion, they’re either nonexistent or they’re not completely inclusive. I’m hoping at this conference that we will truly raise awareness and equip people with the tools they need to take action, whether it be within their synagogue community, within another Jewish space such as a camp environment or other youth programs, or even in the home.”

Schneider emphasized why this type of learning is so significant.

“You may already have a very welcoming LGBTQ space, [but] this day is going to provide new learning opportunities to help folks understand what the needs of trans and nonbinary folks are, and I think this is a unique opportunity.”