For JFCS, There Will Be No Place Like Home 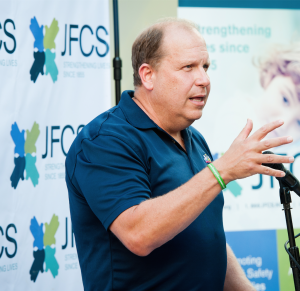 Come Fall 2016, Jewish Family and Children’s Service of Greater Philadelphia will have a new home.

On Sept. 9, a groundbreaking ceremony officially kicked off what will be a year of construction and transformation of an office building on Montgomery Avenue into the agency’s new Barbara and Harvey Brodsky Enrichment Center in an $8 million endeavor.

With opening remarks from JFCS president and CEO Paula Goldstein, a small group of guests fanned themselves in the early September heat as the speakers — including JFCS Board Chair Michael Willner, State Sen. Daylin Leach, Montgomery County Commissioner Josh Shapiro and the building’s namesake, Barbara “Bobbi” Brodsky — shared their stories and thoughts on what it will mean for the community to have the new facility in the area.

“Today is a day that completes one of the most significant goals of my life. This state-of-the-art facility will have a dramatic impact on the community,” said Brodsky, lead donor on the project. “If you can do something good for other people, that is the greatest gift that you can give.”

JFCS operates four other branches in North and Northeast Philadelphia, Center City and Elkins Park. The Bala Cynwyd location will be in addition to the existing operations, which will all remain open.

JFCS has been hosted in synagogues among other facilities around the Greater Philadelphia area, Goldstein said, but ultimately, the need for the organization to have its own dedicated space grew too great to ignore.

“Today really just begins the acknowledgement that we’re going to be here in the Lower Merion community,” Goldstein said of the groundbreaking ceremony. “It helps the neighborhood to know that we’re coming — it’s the start of our renovation.”

The new home for JFCS was purchased for $2.2 million from the Tuttleman family. David Tuttleman, son of the late local philanthropic giants Edna and Stanley Tuttleman, represented his family at the ceremony.

Goldstein said the entire JFCS staff was involved in coming up with ideas of what the rooms would look like at the new site.

“It’s been incredibly fun to work with the architect around the space,” she said, adding they’ve considered ways for the rooms to look “cozy and comfortable and inviting” for people. “It’s been very rewarding to raise the dollars that we have in our community.”

A key component of the new center will be offering services for those with disabilities — a priority for Brodsky.

“What Bobbi has deeply wanted for the community is a place — a place for individuals with intellectual disabilities to go,” Goldstein continued. “A place that would enable them to grow and develop the necessary skills to live healthy productive lives. JFCS wanted to be that place.”

According to Goldstein, the focus inside the complex will be around group services, community-building and “helping those that are most isolated because of their life challenges make connections in the community. That’s what’s going to be happening here.”

“What I like to tell people is, we can see somebody who has an intellectual disability in the office and we can help them get benefits, and we can refer them to one of our groups to practice their social skills,” Goldstein added. “Then, if we’re really able to help them become a volunteer for the community, then we’ve done it all.”

Some of the speakers had personal connections to JFCS and its services.

Leach, a Democrat who represents the 17th District in Montgomery and Delaware counties, is intimately familiar with the organization’s predecessor, Association for Jewish Children. He shared that as a child, he was placed in foster care for a number of years when his mother could no longer take care of him.

“In a way today, I come here feeling like I’ve come full circle,” he said of attending the groundbreaking.

It’s “terrific” that the agency is expanding its services to the Main Line area and becoming a part of the community, he added.

“A lot of people don’t think we need this sort of help in the Jewish community sometimes — but we do.”

For Goldstein, the groundbreaking couldn’t have come at a more propitious time for JFCS — the organization is celebrating its 160th anniversary this year, she informed those assembled.

“The support of every person here has enabled us to move forward and ensure that JFCS will remain strong, relevant and impactful for the next 160 years.”