By Amishai Gottlieb, The Jewish Exponent 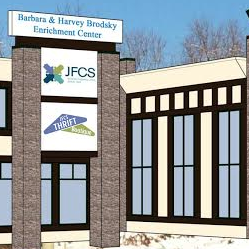 Jewish Family and Children’s Services of Greater Philadelphia is expanding to the Main Line as part of a long-term initiative.

A projected $8 million project was officially launched last month when the nonprofit organization, which services seven target populations including Holocaust survivors and older adults, people with disabilities, children and teens, and critical needs, purchased a $2.2 million building on Montgomery Avenue in Bala Cynwyd.

The 18,000 square foot new building will be the agency’s fifth JFCS branch but its first outright purchase of a building. The four other offices — located in Northeast Philadelphia, North Philadelphia, Elkins Park, and Center City — are all rented.

JFCS officials were quick to emphasize that the new site is an addition, not a replacement, to their current setup.

“We needed to be much more out there in terms of our community connections and the community engagement programming that we do for our clients,” said Pia Eisenberg, vice president of institutional advancement at JFCS.

“The Main Line was one of the only areas that we didn’t have a permanent presence.”

The new facility, which will be called the Barbara & Harvey Brodsky Enrichment Center, is slated to have a library, a therapeutic garden, a parent-child resource room and a financial empowerment resource center among other services.

So far, JFCS has raised a little more than $5.2 million of its $8 million goal to fund the building’s purchase and renovation, and to get programming off the ground, agency officials said, in large part due to Barbara Brodsky, the project’s lead donor.

“It gives me great pleasure to enrich the lives of others,” Brodsky answered succinctly when asked about her sponsorship of the new center and 10-plus years of involvement with JFCS.
“If I’m able to do it, that’s what I want to do — I want to leave my mark in this world.”

Brodsky, whose husband, Harvey, passed away in 2011, also cited a “personal connection” with the group’s endeavors to service the area’s special needs population, which will be an emphasis at the new facility, but she declined to give details.

The facility will house workshops, therapeutic programs and support counseling geared toward adults living with disabilities.

“It’s all about enabling our clients to be independent and to be a part of the community — I can’t emphasize enough that it’s about the community connections,” Eisenberg said, adding that she hopes other local Jewish groups will partner with JFCS to run programming in the new building.

Paula Goldstein, president and CEO of JFCS, said the organization is hoping that the center will open for business by next summer.

“This is a huge moment for us, none of this happened overnight,” said Goldstein.

“This building is really the culmination of years of strategic planning and discussion amongst our board, our staff and our leadership to really think through how we are going to ensure that we’re here for another 160 years.”

Naomi L. Adler, CEO of the Jewish Federation of Greater Philadelphia, gave her stamp of approval for the move, adding, “We are excited that this new space will open up an additional opportunity for JFCS and other Jewish communal organizations who work in this area to collaborate.”