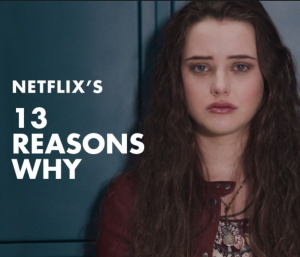 Where 13 Reasons Why goes, criticism follows — and some believe it goes too far.

The Netflix series, based on the 2007 book of the same name, follows teenager Hannah Baker’s path to suicide. Before her death, she recorded her reasons for killing herself on 13 cassette tapes, which were later distributed among select fellow classmates — each of whom were a reason why she ended her life.

It’s no surprise that after its March debut, the phrase “how to commit suicide” rose 26 percent in internet searches, according to a study published by the Journal of the American Medical Association Internal Medicine.

Though some argue the show brings to light these deeper emotional issues, others believe it went too far in actually reenacting them.

Scenes of several incidents of rape and ultimately Baker’s death — a three-minute shot where she slits her wrists in a bathtub — are graphic.

“We worked very hard to not be gratuitous,” said showrunner Brian Yorkey in the Netflix post-production 13 Reasons Why: Beyond the Reasons, “but we did want it to be painful to watch because we wanted it to be very clear that there is nothing in any way worthwhile about suicide.”

But Dvora Entin, Jewish Family and Children’s Service of Greater Philadelphia licensed clinical social worker, sees the show as an opportunity for discussion.

While the show was deemed “irresponsible” by World Health Organization and Federal Communications Commission standards — in terms of what should or should not be shown — she added that the portrayals were “spot on.”

“When there’s exposure to this kind of trauma on television,” she said, “it impacts anybody who watches it. There’s a PTSD effect.”

About 40 parents and teens participated in an interactive seminar Sept. 13, led by JFCS, to address the impact the show had on the community — and how to better address these issues before it’s too late.

“It was important for us to do it in a way that was very mindful knowing that we were talking about such a challenging topic of suicide,” Entin said.

The adult group discussed the insight the show provided for what life can be like for an adolescent.

“What came to our attention were things such as deep isolation that children or adolescents feel, even those that were jocks or the most popular kids were still feeling very alone and isolated and lacking connection,” she said.

These signs are recognized by deep changes in behavior, like withdrawing from friends they normally spend time with, increasing episodes of irritability, verbalizing ending their own life by saying goodbye or giving away their possessions, or self-harm.

“Don’t be afraid to ask your child, ‘Are you thinking suicidal thoughts? Are you thinking about hurting yourself?’” Entin reiterated of Shoval. Communication is key to prevention.

But while parents on the show — and often in real life — are actively trying to connect with their children, Entin said “it still wasn’t enough.”

She recommended parents find another outlet for their teens to talk to, whether a mentor, therapist, older sibling, teacher — someone who gives them a space to connect in a way they can’t with their parents.

The teens — divided by gender — each joined two clinicians and a JFCS therapist for an open conversation about the show and their own high school challenges.

“The kids were really willing to be vulnerable and to share with each other,” she said. They even suggested doing this program again.

The second season of the show premieres next month, and if kids want to watch it, Entin suggests parents watch with them.

According to a Netflix survey, 80 percent of parents have watched a show their teens watch to feel close to them — and they welcomed it.

“It might be an opportunity for a parent to say, ‘Has this kind of school behavior ever happened to you? Have you ever felt that alone? … If you ever feel that angry, would you be willing to come to me? Or just know that I am always here for you and will get you the help that you need,’” she explained.

“It can be a springboard conversation,” she noted, “to share not only your thoughts and feelings about the show … but also about expressing your values and how they’re presented or not presented in the show.”