Donating a mattress to someone in need? $18.
Providing a winter care package for a struggling family? $500.
Seeing exactly where your charitable dollars are going and teaching your children about giving along the way? Priceless. 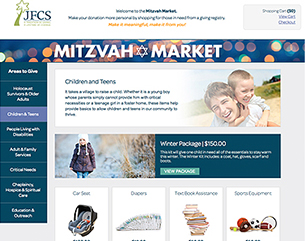 At least, that’s the goal Jewish Family and Children’s Services of Greater Philadelphia is aiming for when the group launches its new online “Mitzvah Market” on Dec. 2.

The market, which will be accessible through jfcsphilly.org, will offer individual donors the option to purchase any of 55 items that will go directly to one of seven JFCS service areas, including Holocaust survivors and older adults, people with disabilities, children and teens and critical needs.

“The goal is to make giving current, the way people are engaging now,” said Suzanne Myers, JFCS’s vice president of marketing and communications. “People want to be really involved in how they give their money.”

The agency contemplated launching the market as part of its new website, which is scheduled to be unveiled at the end of December. But officials decided to push the market’s opening to coincide with #GivingTuesday, which was designed to create a national and international movement focused on charitable giving following the post-Thanksgiving spending sprees of Black Friday and Cyber Monday.

“We really wanted to take advantage of #GivingTuesday and the momentum it’s gained,” Myers explained.

Robert Evans, president of the Willow Grove-based Evans Consulting Group and a member of the Giving USA editorial review board, recently penned an opinion piece in the Jewish Exponent titled “#GivingTuesday Is Around the Corner: Are You Ready?” in which he outlined ways local Jewish charities could use the day as a launching pad for new projects.

In his opinion, JFCS is on the right track with its Mitzvah Market, which he said is distinct compared with other e-funding initiatives that Jewish organizations are experimenting with.

“This is the way of the future, there’s no question about it,” said Evans. “Donors are looking for ease of contributing, and this is a good, interesting approach that’s very innovative.”JFCS developed the online market idea “from scratch,” Myers said, noting that while other sites utilize a similar concept, “they weren’t doing things to this level where you can really shop for items” for people who benefit from multiple programs.

“This is authentically an e-commerce shopping experience,” Myers added.

JFCS’s leaders hope that the site will encourage giving among younger Jewish philanthropists, who, studies show, give less to Jewish causes than their older counterparts.

The Pew Research Center’s 2013 “Portrait of Jewish Americans” found that just 43 percent of non-Orthodox Jews between the ages of 30 and 49 nationwide donates to any Jewish cause, compared to 60 percent among those 20 years their senior.

Pia Eisenberg, vice president of institutional advancement at JFCS and one of the Mitzvah Market’s creators, said the new site will appeal to younger Internet-savvy donors while also allowing families with children to gain a deeper understanding of how their donations are being used.

“Families can go on the site with their children and say, ‘Lets go shopping for a family in need,’ ” Eisenberg said. This way, parents “can share a real teaching moment with their child.”