Transgender and Jewish in Philly? ‘It’s not so simple when Moshe becomes Marsha’ 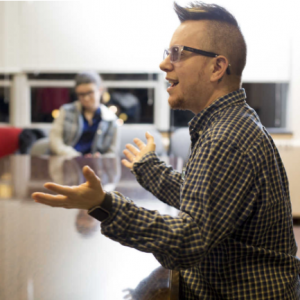 In the last few years, the battle over transgender rights has roiled school districts, courtrooms, statehouses, and the national political stage, most recently via a Trump administration directive rolling back protections for transgender students in schools.

But in the Orthodox Jewish community, where gender roles are starkly defined and synagogues seat men and women separately, trans rights are advancing much more quietly, often through discreet conversations with people like Saundra Epstein of Elkins Park.

Epstein, an Orthodox Jew and advocate for LGBTQ acceptance, noticed some rabbis were open to accepting transgender congregants — but not to publicizing it. So, if a trans person is seeking a synagogue, Epstein acts as matchmaker and finds a rabbi willing to take the person in.

“I personally do not want our children or community members to feel like there is no place for them in the Orthodox community,” Epstein said. “That said, it’s not so simple when Moshe becomes Marsha. For the community, it’s very, very challenging.”

It’s something, though, that more Jewish communities than ever are grappling with, publicly and privately. Some have taken stands for transgender rights: the Union for Reform Judaism adopted a broad inclusion policy in 2015, and local synagogues have united to form J.Proud, a consortium of groups committed to advancing LGBTQ inclusion. Last year, the West Philadelphia congregation Kol Tzedek became perhaps the first in the region to hire a transgender rabbi, Ari Lev Fornari.

And over the last year, more synagogues have been asking for trans sensitivity trainings for staff and members, said Phoenix Schneider, program director of the nonprofit Jewish Family and Children’s Services’ LGBTQ initiative.

“In the synagogues, a kid will come out as saying they don’t identify within a binary or they don’t know if they’re a girl or a boy. So, they’re saying, ‘What do we do next? How do we support this young person?’ ” Schneider said. “That’s when they tend to bring someone like me out to do a training.”

Schneider believes it’s a moral imperative, given the high rates of suicide and self-harm by transgender young people.

“Talking about gender outside a binary means that young people can feel safe expressing that they may not fit into this binary system,” Schneider said. “I recently did a workshop with fourth graders, and a kid came out as nonbinary and used ‘they/them’ as their pronoun.”

On a recent evening, Schneider met with a youth-leadership group comprising 11th– and 12th-grade students from Congregation Kol Ami and Temple Beth Am in Elkins Park.

The goal for the evening, Schneider said: “It’s important to think about how we can be the best support possible to LGBTQ friends and loved ones, and an advocate and an ally.”

The conversation encompassed topics you may not remember from Sunday school.

“How many genders are there?” Schneider asked. The students knew to answer, “Infinite.”

They talked about how you can tell people’s gender by looking at them (you can’t), whether the word dyke is offensive (depends on the context), and the politics of gender-policing bathroom use.

“Why not let people use whatever bathroom they feel comfortable in? Who cares that much?” asked Eleanor Streitwieser, 17, of Elkins Park.

Kol Ami recently launched an LGBTQ inclusion initiative, as a parallel to existing initiatives around special-needs and interfaith inclusion, said Morgan Selkirk of Huntingdon Valley, who is leading the effort. She said early steps were to get “all-gender” bathroom signs, update the congregation’s nondiscrimination policy, and revise the congregation’s paperwork, removing male/female check boxes and replacing mother and father on school forms with parent 1 and parent 2.

“It’s about making a safe space for everyone,” she said, making them feel not just welcome but also included.

She directs the Welcoming Shuls project at Eshel, an organization advocating acceptance for LGBTQ people in Orthodox communities. Through that work, she has surveyed more than 50 Orthodox synagogues around the United States and Canada. Sixty percent of respondents said members could sit where they liked; others said that wouldn’t always be the case.

“You sat in the men’s section, now you’re sitting in the women’s section. How does that play out? Some people just can’t deal with it.”

And the accommodations for LGBTQ congregants may not suit everyone.

For instance, even if a person’s gender change is recognized by a synagogue, it might mean that the individual’s marriage will be deemed dissolved by an Orthodox community that rejects same-sex marriage.

Or consider Epstein’s 29-year-old daughters, identical twins who are lesbians. One of them recently had a ceremony to celebrate her commitment to a life partner, but it was not a Jewish marriage.

“The ceremony was essentially an exclusive business association,” Epstein said.