Ty Pennington Helps JFCS Connect with Community, His Own Roots 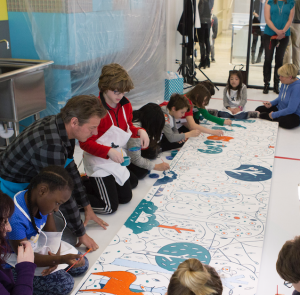 By Jon Marks, The Jewish Exponent

Ty Pennington was transported back in time while Cynwyd Elementary School third graders labored over a mural adorning the Children’s Den of the Jewish Family and Children’s Service (JFCS) new Barbara and Harvey Brodsky Enrichment Center.

“It takes me back to my childhood,” said the former host of Trading Spaces and Extreme Makeover: Home Edition, who came to town March 21 to help JFCS prepare for the April 3 grand opening of its $7.2 million Bala Cynwyd facility. “These are the kind of projects I just love doing.

“If I hadn’t ended up doing TV and building houses, I probably would’ve ended up being some kind of art teacher. And when you get a chance to work with kids and get them involved, it’s special.”

Seeing the faces of those children engaged in this paint-by-numbers forest scene with animals reminded the 52-year-old Pennington what it was like for him.

“I remember being a kid growing up,” Pennington said. “My mom was a child psychologist. She learned early on that the only time I would calm down was when I was drawing, so she figured, ‘Let’s get him some art supplies.’

“The walls in the house got destroyed quite a bit, but things weren’t broken as much, so long as I was painting.”

Pennington, who wore JFCS overalls, found other memories surface as he looked around.

“Growing up in Atlanta, a lot of my friends were Jewish, and I would go to their synagogues,” recalled Pennington, who used to film Trading Spaces — produced by locally based Banyan Productions — in Philadelphia “Yes, I would mainly go to eat the pastries. However, I got to feel some of their fun and excitement.

“I grew up with pretty liberal parents, so I grew up learning about several religions, which made me fairly well versed. My brother, Wynn, married into a Jewish family. My niece, Sloane, married a Jew. So we always celebrate Chanukah and Christmas.

“That makes me somewhat part of the tribe.”

Watching the children painting and seeing the project near completion was overwhelming for the woman whose name is on the front of the building.

“It’s just so gratifying to be blessed to be able to do this for the community,” said Barbara Brodsky, known to everyone as Bobbi. “It’ll be a wonderful asset.

“There are so many wonderful services JFCS does, and now we’re all under one roof.”

This new facility is designed to meet the needs and programing for a wide range of clients including Holocaust survivors, older adults, children, LGBTQ communities, people living with disabilities and parents seeking to adopt a child.

Social services will range from foster care and adoption, to family support and education, to financial assistance and healthcare, among other things.

JFCS will continue to operate out of the Jewish Community Services Building in Center City, but the new facility will connect the organization with needy individuals who’ve sometimes been overlooked.

“It’s just the beginning for us,” JFCS President and CEO Paula Goldstein said. “It’s really about continuing to do all the good work we do in the community and in people’s homes.

“We created this with the goal of building a community for people we serve who are isolated and people who want to volunteer and give back.”

“I’m really blown away at what they do,” said Pennington, who’s written two books and also hosts Ty Pennington’s Great British Adventure. “I didn’t realize it was that vast. But I definitely love working with charities that do so much in the community.”

And he loves working with kids, particularly on this mural. He said he got the idea for it from talking to several colleagues and sketched the outline. The kids did the rest.

“There’s something about a project, and I thought it would be fun to do a piece of art work where the kids themselves could add the colors to it and literally bring it to life,” he explained. “Whether they’re young or old, people really love doing projects.

“You get all walks of life here. All kinds of animals living in the forest happily together. And what’s cool about this will be when the kids walk into the building and see this, knowing they had a huge hand in it.”