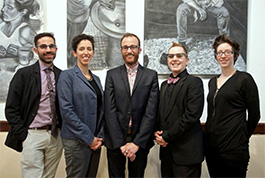 Members of Philadelphia’s Jewish LGBTQ community came together for a Passover seder hosted by J.Proud at the William Way Community Center on April 6.

Phoenix Schneider, director of the LGBTQ Initiative for Jewish Family and Children’s Service of Greater Philadelphia and one of the event’s organizers, estimated that about 75 people attended the seder, including Elad Strohmayer, Israel’s deputy consul general to the mid-Atlantic region, and Warren Hoffman, associate director of community programming at the Jewish Federation of Greater Philadelphia’s Center for Jewish Life and Learning.

Though the seder was hosted the past couple of years by Spectrum, a Tribe 12 affiliate that aims to build community for LGBTQ Jews in their 20s and 30s, this was the first year that it was hosted by J.Proud, a consortium of more than 20 local Jewish organizations that includes Spectrum and Federation.

The seder, which had a “diverse audience,” according to Schneider, was led by Rabbi Isabel de Koninck, the executive director of Drexel Hillel, and was sponsored by several groups such as Philadelphia Gay News and the Israeli Consulate.

“It was beautiful, it was very moving, and it was different because it wasn’t just an LGBTQ seder because we had LGBTQ people there, it was truly incorporated into the Haggadah. It was really very inclusive, there were questions tailored for the LGBTQ community to think about,” said Schneider, who also touched on Passover’s theme of freedom by calling the seder “liberating. Just sharing our LGBTQ experiences was really powerful and meaningful.”