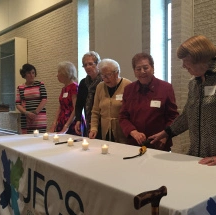 Among the Holocaust survivors: 94-year-old Fritzi Zbik and 91-year-old Suzana Pereszlenyi, they were in the Dachau concentration camp when it was liberated. “At the end when we marched out, when did we march out from the camp?” Frtizi asked Suzana

“1945. We were talking about what we were going to cook going to eat when we get out,” Suzana reminded her.

“We got liberated, we were saying ‘oh, first thing, I’m going to take a bath, I’m going to lay on a pillow’ because we laid on boards there,” Fritzi recalled.

Fritzi was among 6 survivors who participated in a candle lighting remembrance ceremony.

“I’m very honored and I honor my family who didn’t make it,” she said.